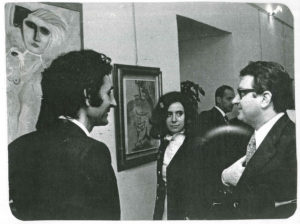 His father’s work as a Greek engineer who built roads in the Middle East, meant that his family moved a lot, so that he had a good chance to come into contact with different cultures.

During his childhood Kattinis attended a French private school ( Pères Lazaristes) until 1951, where his English teacher, Father Hrood, after discovering some of his drawings, encouraged him to paint.

In 1951 Kattinis moved to Jerusalem to attend the Jesuit high school. His first works were produced here  where he was mostly influenced by the picturesque landscapes around him (the Dead Sea, Petra and Jericho), and he painted landscapes and still life scenes.

In Damascus, Kattinis took  active part in the cultural life and intellectual commitments of the period. During his repeated visits to the Archeological Museum of Damascus, he was strongly attracted by the Sumerian and  Assyrian Art.

In 1957 he exhibited for the first time, invited by the Egyptian Cultural Center in Damascus  that awarded him by  purchasing two of his paintings of the expressionist period. 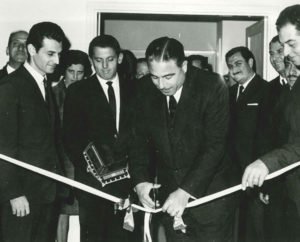 Kattinis, the Minister of Culture, the Director of the Center. -French Cultural Center. Amman (Jordan)

.In 1960 the Museum of Modern Art of Damascus invited him at the “Salon d’Automne” and purchased two of his abstract- symbolic  paintings.

Besides he was invited by the French Cultural Center in Amman (Jordan) for a solo exhibition  and by the Sursock Museum of Beirut for a group exhibition  where he had an opportunity to meet and confront with the art experiences of artists from all over the world.

Mamoud Hawa, Prof. of Philosophy and Art History at the U.N.E.S.C.O., wrote of him “…Kattinis has understood that mankind  is on the threshold of a new civilization and therefore needs the ancient wisdom to be guided towards the unknown  future. This helps us understand that in Kattinis everything is deeply meditated, without being deprived of  the freshness of intuition…

A serious car accident forced him to spend a period at the hospital, where he had time to meditate on his life. His personality underwent a great transformation. It was the moment of the artist’s birth; from there on he would devote himself exclusively to painting. 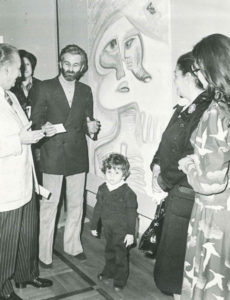 In 1961 Kattinis decided to leave the Middle East for Europe, willing to take part in the European Art movements of the 1960s and the exciting ferments of the period that he had intensely studied.

A year spent in Innsbruck (Austria) – 1967-68 , surrounded by the rocky, white mountains that strongly inspired him, gave way to a new phase of his art, where symbolism and expressionism merge into strongly colored images of landscapes and human beings.

He lastly settled  in Rome, where he had attended the Academy of Fine Arts  with the  very famous painters  Mario Mafai, Nino Maccari  and  Giuseppe  Canali as teachers, and gained his Diploma in painting, engraving and decoration.

Kattinis set up his studio in  Trastevere in Rome, and officially entered the artistic Roman world. Invited by the art gallery “Il Poliedro” for a solo exhibition, he is introduced by writings of the famous poets, writers and journalists  Leonardo Sinisgalli,  Ugo Mannoni , Renato Civello and Giancarlo Fusco.

It was an extremely lively time in Rome, one of the European cinema’s most fertile periods, when many artists from all over the world lived and worked in Trastevere and Via Margutta.

In 1972 Kattinis was invited at the  famous  Museum Palazzo Braschi of Rome, for a solo exhibition of his symbolic paintings in full maturity. Here the figure of man, fixed out of his temporal significance,becomes a dominant theme of his work.

Rolando Meconi, curator of the exhibition, writes: “…each picture evokes a full speech without suspended  words, a world of sensations springing from his  Middle-Eastern experience as well as from the European and mostly from the Italian culture. The power of our Renaissance is easily evoked by the cleanliness of the sign and the apparent simplicity of the line.”

During the following years he drew, painted and engraved intensely in Rome, invited by many prestigious galleries and museums for single or group shows in Italy and abroad.

In 1977 the Greek Municipality of Athens organized a retrospective of his work at the  Municipal Theatre (Dimotikò Thèatro) of Piraeus- Athens (Greece). Curator: the Greek art critic Eleni Gyzi,  with articles on the Greek art magazine Kaleidoscope and Greek newspapers.

In 2002 Kattinis was invited by  The Municipality of Pisa – for an exhibition entitled ”Cantami o Diva” held in  Santacroce in Fossabanda in  Pisa and in  Montecatini (Italy). 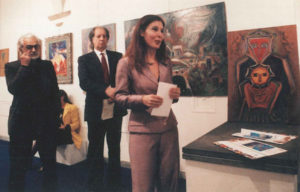 During the years he has been commissioned exterior and interior large murals and frescoes, among which the three large frescoes inside the suites of “ Le Fabbre – Fattoria  Pianetti  in Manciano ( Italy ),  inspired by the spirit of the ancient Etruscan civilization, together with a beautiful album of 12 large multicolor etchings “ Gli Etruschi”

Kattinis can master a variety of painting ( oil or acrylic on canvas ), drawing (pastel, watercolor and mixed techniques), printing techniques ( such as etchings, engravings, serigraphies).

Kattinis’ works have been published on many cover books of poems, narrative, and social activities, and his drawings  have illustrated several books of poems.

During his artistic activity Julianos Kattinis has received many and prestigious acknowledgements such as  Medaglia d’oro, VII Gentes, Palazzo delle Esposizioni a Roma (1962), Premio Internazionale “Fontane Di Roma – Teatro Argentina – Roma (1989) and others.

Italian and foreign newspapers and magazines have written about Kattinis and many of his works can be found in museums (Albertina Museum of Vienna and Palazzo Braschi Museum of Rome, to mention some of them) and in public collections.